WHEN CAN EMPLOYERS MAKE CUTS TO EMPLOYEE’S WAGES?

The expectation that someone will be paid in exchange for working for their employer is obvious. But what happens when an employer needs to withhold pay or temporarily reduce an employee’s rate of pay? The answer depends on the type of deduction and what both the law and contract say. Employers that fail to make deductions carefully may find themselves before a tribunal defending an expensive illegal deduction from pay claim.

WAGES
Mark Stevens, an employment lawyer at Veale Wasbrough Vizards, says that the starting point for any discussion is to look at what makes up someone’s wages and that the law defines it as any sum payable to the worker in connection with their employment. This includes non- contractual bonuses, commission and statutory sick pay.

However, pension contributions, expenses and a loan to an employee are not considered wages – although a failure to provide these benefits when contractually obliged to may lead to the employee bringing a breach of
contract claim.

Unequivocally, Stevens says that it is unlawful for an employer to make any deduction from a worker’s wages “unless the deduction is required or authorised by legislation; or the worker has already given written consent to the deduction being made.” 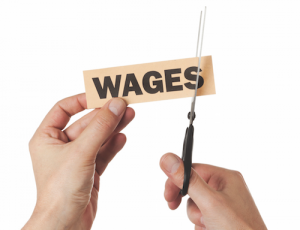 DEDUCTIONS
Using the definitions above, Stevens says it’s clear that an employer can lawfully make deductions from wages in accordance with a statutory requirement to deduct and pay sums over to a public authority, such as to HMRC via the
PAYE system.

But he adds two more causes for a deduction – where they are necessary to right a mistake following an ‘error of computation’, for example, where an automated pay roll system makes an error. There are also exceptions in the legislation which allow a firm to make deductions in very specific circumstances, such as an overpayment of wages and expenses incurred by the worker.

Most importantly, from an employer’s point of view at least, Stevens says the law notes a deduction will not be unlawful if it has been “required or authorised to be made by virtue of… a relevant provision of the worker’s contract” or if “the worker has previously signified in writing his agreement or consent to the making of the deduction”. From Steven’s perspective, an employer wishing to make a deduction must check the contract before making any proposed deduction. He advises: “If the contract says nothing about making deductions from wages, then an employer will need to obtain prior written agreement from the employee to make the necessary deduction.”

UNLAWFUL
Where the employee has not given written consent, whether in the contract of employment or otherwise, an employer should take care to avoid making deductions. Why? Because non-payment of a worker’s wage on any one occasion will be classed as deduction. Interestingly, a deduction can also arise from a late payment rather than no or a short payment.

It’s worth noting that an unlawful deduction could follow if an employer reduces one element of a wage but increases another element, leaving no overall reduction in pay. “This principle was considered in the 2002 case of Pendragon plc v Nota,” says Stevens, adding: “The worker was not paid £72.50 in overtime payment, but his pay for his contracted hours was increased. The Employment Appeal Tribunal held that each element of wages was isolated and the worker had suffered an unlawful deduction as a result.”

However, Stevens reports that since the introduction of employment tribunal fees in 2013, claims for unpaid wages have become less frequent since in many cases, the fee could be more than the amount in dispute. “Nevertheless,” he says, “firms should be aware of their obligation to pay wages in accordance with the contract as a disregard for paying wages correctly is very likely to lead to the employee resigning and claiming constructive dismissal.” He suggests that those that might need it should ensure that contracts include a provision to allow for appropriate deduction of wages if required.