Why racing is vital for testing 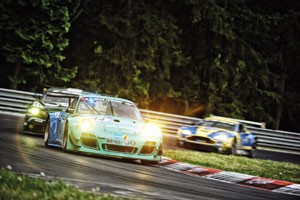 The 24-hour race at the Nürburgring, Germany, sees 700 drivers in 175 vehicles compete while the brands and car sponsors take advantage of the 300,000 plus visitors and TV viewers.

But to Falken Tyres, this race is an opportunity to do some heavy testing on its tyres to try and find any techniques that can benefit its passenger vehicle tyre developments.

Falken’s EMEA Marketing Director Markus Bögner says that the N24 race is a chance to not only maximise the brand’s exposure, but also to learn as much as they can about the compounds and their performance, as well as auditioning to the vehicle manufacturers who brought teams to the race.

“We not only want to compete with the car but with the tyres and this is a race where we have competition from other tyre manufacturers, so we want to show the technology we have developed. It is a different aspect to running a race team, on the one side is the racing and marketing, and on the other side is to show vehicle manufacturers what we can do.”

Peter Dumbreck, Race Driver for Team Falken GT team, who helped the team finish third in this year’s race, said: “There are very few championships now where there is a tyre war. You look at some of the others and they are all running the same tyres, so this is one of the few tracks and championships where you run whatever you want. Michelin is our main competitor and that is our benchmark.”

While the track has a multitude of different surfaces and cambers as well as uphill and downhill sections, which all play their part in testing a vehicle to its fullest, replicating a race tyre’s performance in passenger cars is not as easy as some imagine.

Bögner says: “The surfaces on this race track are the same as on the street. You have to balance the tyre to work as good and as much as possible in different circumstances.

“However, it is complicated to replicate race technology in the mass automotive sector because of the cost. The cost of the compounds you use on the race tyre can be extremely high. But if you learn that something is working, then you adapt it for use on a normal car, because the more you can produce the cheaper it will become.”

While track to road developments are not common, Falken’s development for its 4×3 tyres saw the tyre bead construction come from the race car, after being modified by numerous race and car engineers. Overall, the 2015 edition was an interesting and varied show, and we look forward to the next in two years’ time.