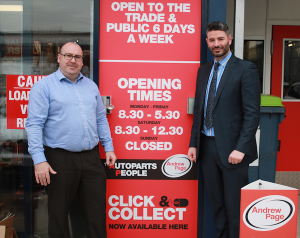 The newest branch of Andrew Page in Woodford Green has thrown up the shutters. In fact, on our visit the doors were wide open for business open in the most literal way as a motor fault meant they couldn’t be shut. Teething troubles aside, we were keen to take a look at the latest branch in Greater London.

As we entered the reception area, staff seemed friendly and professional, dealing with customer queries face-to-face and over the phone. South Divisional Manager Ben Buchanan and Branch Manager Gareth Jones welcomed us, both of whom are old hands in the aftermarket. Buchanan joined AP from Allparts having previously worked for Bosch, Cosworth and even a spell in a Lamborghini franchise. Meanwhile, Jones worked for arch-rival ECP for 12 years before transitioning to Branch Manager for the AP store in December.

Once we ‘d been properly introduced, we were keen to find out how the store has taken off since the launch: “Within four weeks of service, daily rates are up and targets have been met already”, Jones said. “We are hitting between 80 – 100 deliveries a day and I’d expect to double this in the next five weeks”. The warehouse currently operates six agency scooters and four vans delivering auto-parts to independent garages and national businesses across the area. 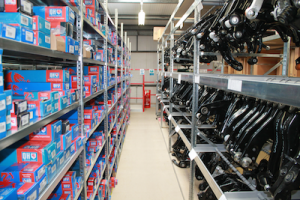 The 5500 sq. ft stockroom has been reconfigured to include a large mezzanine giving it a holding capability equivalent to 11,000 ft. “We have five miles of shelving running down the warehouse. We have managed to do this because of how we packed the stock”, Buchanan explained, adding that the number of SKUs range between 26,000 and 50,000 as the branch adapted its stock profile for the local area.

However, the fringe between Essex and London is a highly competitive patch – and not one where this factor really had a toehold in the past. Explaining the decision to open there, Buchman said: “We came to the Woodford Green because the main factors are under represented here”. He added that ECP dominates the area and there was a feeling that local garages might buy into the added-value services offered by Page, such as IMI training. There are also a number of the national accounts covered by the firm nearby, including an F1 Autocentre in an adjacent unit and a Kwik-Fit a short d 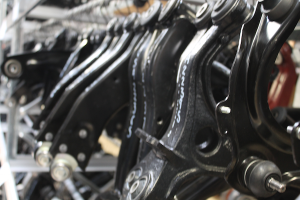 Prior to starting, the Woodford Green staff had to undergo an intense six-week training programme provided by various managers from the company. The store’s training services for their team and external businesses is something thats helped the branch rank against the competition.

As our tour came to an end, we asked the team what they’d hope to achieve by the end of 2016: “The forecast so far is looking good and by the end of February, we hope all our sales guys will have met and established professional relationships with all our customers”, Jones responded.

“We are looking to engage with more independent and national businesses within a five mile radius of the branch. We are not focusing so heavily on products in the spring and summer, but more about releasing as much bandwidth within their business. The more the technicians can do and work on is how they will increase on how many parts they can buy, and therefore buy from us”, Buchanan concluded.