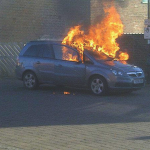 A criminal investigation into the Vauxhall Zafira fire scandal has been launched by DVSA.

The government agency is working with officers from Luton Trading Standards to investigate Vauxhall.

In a written statement, Andy Rice, DVSA head of counter-fraud & investigations, said:: “DVSAs priority is to protect you from unsafe drivers and vehicles”.

“We have made it clear to manufacturers that to protect consumers, they should swiftly rectify problems and meet their obligations under the code of practice”.

“DVSA will take the necessary action against any manufacturers who fail to comply with their obligations.”

The long-running saga of the people carriers catching fire dates back to 2009, when the then GM-owned carmaker first had reports of blazes.

Six years later, and following reports of over a hundred more fires, the VM attempted to point the finger at the aftermarket, blaming ‘unauthorised repairs’ to the thermal resistor cut-off on the heater blower, a recall was offered. The repair was unsuccessful in fixing the problem and another recall with a more extensive repair was made.

Following this, Vauxhall bosses were called into a Select Committee hearing and faced questions from MPs.

Although a majority of the 160 recorded fires have resulted in the total destruction of the vehicle, to date there have been no reports of serious injuries.